Venezuela’s government has announced it has foiled a potential terror attack, arresting a former CIA operative while he was on a stakeout near the country’s largest oil refining facility.

Matthew John Heath was arrested with three other Venezuelans outside the Amuay and Cardon refineries in Falcon state in the west of the country, reportedly carrying a submachine gun, a grenade launcher, four blocks of C4 explosives, a satellite phone, and stacks of U.S. dollars. He has been charged with terrorism and weapons trafficking. The country’s prosecutor general, Tarek William Saab, claimed that Heath entered Venezuela illegally via the Colombian border without a passport, although police found a photocopy hidden on his person. Saab also said that Heath was carrying a small coin or badge that CIA employees use to prove their identity to one another without raising suspicions.

Images released by the Venezuelan government show items seized from Heath upon his arrest: 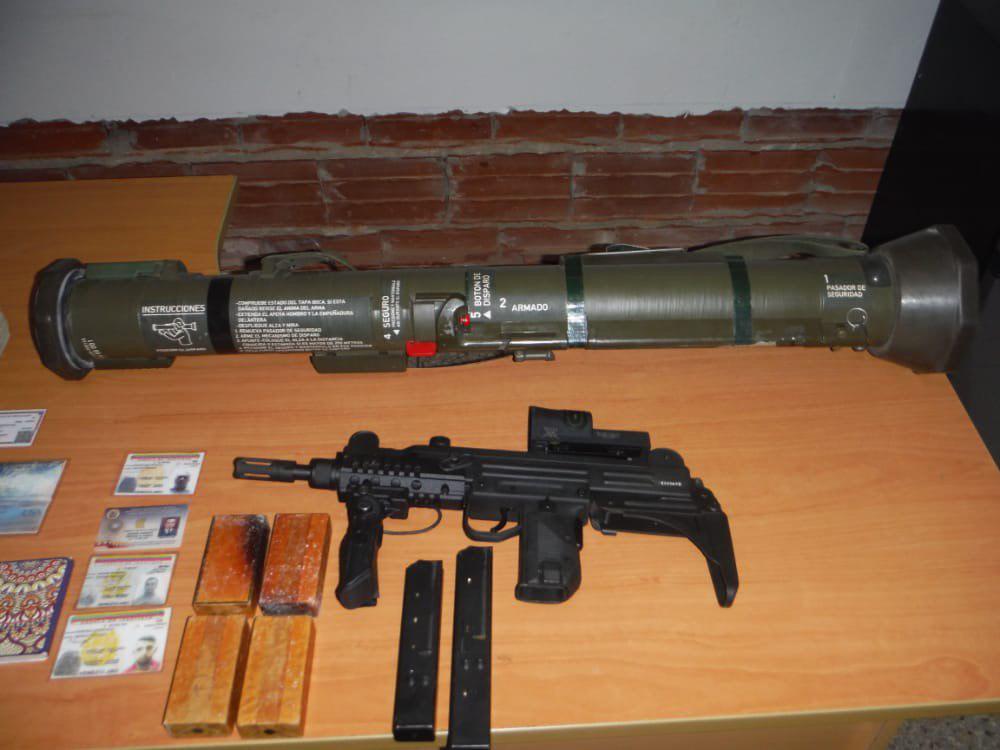 According to police investigations, Heath is a former marine who served as a communications operator in a “secret CIA base” in Iraq for ten years between 2006 and 2016, where he was hired by private security firm MVM. MVM was founded by a former U.S. Secret Service agent and continues to work closely with Washington. According to business directory Dun & Bradstreet, the company “provides security staffing and consulting services, primarily to U.S. government entities.” “Need a secret agent?” begins MVM’s biography. Researcher Jeb Sprague told MintPress today that Heath’s family has a lengthy background in the oil industry. While this suggests that the operation could have been as “innocent” as a corporate spying mission, it is difficult to see why anyone would possess grenade launchers and C4 if not for seriously nefarious purposes.

Silence on the incident from the U.S. government, who never misses an opportunity to escalate tensions with Venezuela, is notable. The fact that the government has not commented on a U.S. citizen being charged with terrorism is “very telling,” according to Caribbean specialist Arnold August, who told By Any Means Necessary that Trump and Secretary of State Mike Pompeo “are in a difficult position,” “dancing around the fact that there are obvious incursions organized by the U.S. into Venezuela that are far from peaceful.”

The story is also being downplayed or simply ignored by corporate media, despite their predilection for printing stories that paint the Maduro government as authoritarian. This, for Latin America expert Dr. Rodrigo Acuña, was predictable. “I’m not surprised at the reaction to this article at all. The mainstream media rarely look to verify or follow up any allegations made by the Maduro government in Caracas that the Trump administration is looking to overthrow it,” he said. Acuña, a researcher and former associate lecturer in Spanish and Latin American studies at MacQuarie University, Australia, told MintPress that the media often follows the U.S. government’s line when it comes to America’s “backyard.”

When the Bush administration supported a coup against the government of Hugo Chavez in 2002, with very few exceptions, most of the mainstream media ignored these allegations. Then when evidence was presented they continued to ignore the claims made by Chavez. This situation continues until this day, where Washington is doing almost everything within its power to topple the government of Nicolas Maduro…For its part, Washington then ignores the statements that come out of Caracas or even at the United Nations while the mainstream media for their part also act in a similar manner.”

After the botched May coup attempt that saw two American mercenaries, Airan Berry and Luke Denman, arrested, the government put out an extremely half-hearted denial, with Pompeo stating only that “there was no U.S. government direct involvement,” although he did admit that he knew who had funded the operation, promising to release the information “at an appropriate time.” This time, however, there has been radio silence from Washington.

The incident in Falcon state happens just as Pompeo is about to embark on a four-day trip to many of Venezuela’s closest neighbors in order, in the State Department’s own words, to “defend democracy” and “strengthen security against regional threats.” Interestingly, when visiting Brazil, Pompeo is not traveling to its capital Brasilia, nor either of its largest cities, Rio de Janeiro or São Paulo, but to Boa Vista, a small city deep in the Amazon jungle on the Venezuelan border, in order to “underscore the importance of U.S. and Brazilian support for the Venezuelan people in their time of need by visiting with Venezuelan migrants fleeing the man made disaster in Venezuela.” That the “regional threat” means Venezuela is made explicit in the press release, the State Department declaring that Pompeo will meet Colombian President Ivan Duque in order to discuss “threats to regional security” like “Maduro’s illegitimate regime.” Pompeo will also visit Venezuelan neighbors Guyana and Suriname.

The Bay of Piglets and other coups

Just before the coup attempt in May, Trump advisor John Bolton not-so-cryptically tweeting that “Morning is coming to Venezuela — again.” U.S.-backed politician Juan Guaidó called on the military to rise up and overthrow Maduro. At the same time, 300 troops, led by American ex-Green Berets, attempted an amphibious invasion of Venezuela. Their mission was to shoot their way to Caracas, taking the presidential palace and ensconcing Guaidó as president. Guaidó had promised to pay the U.S. outfit around a quarter-billion dollars for their services. However, the operation ended in complete disaster upon even minimal pushback, as the mercenaries were immediately overpowered and apprehended by disgruntled members of the House of Socialist Fishermen in the sleepy coastal village of Chuao. Images show that some of the heavily armed, highly-trained mercenaries appear to have wet themselves in terror when coming into contact with lobstermen armed with handguns, fishing knives and box cutters. Berry and Denman were recently sentenced to 20 years in prison for their actions.

The U.S. government has bankrolled, if not organized, a great number of coup attempts in Venezuela, going back to 2002, where it supported insurrection attempts in April and December. Since then, it has spent hundreds of millions of dollars funding, training, organizing and supporting groups inside the country, all of which have one thing in common: a strong aversion to the left-wing government that has held power since 1999.

Juan Guaidó, the self-declared president of Venezuela, emerged as a Pentagon protege in 2007 as a leader of ultimately unsuccessful student protests aimed at forcing a change of government, subsequently studying at George Washington University in Washington, D.C. Since January 2019, Guaidó has launched five audacious bids at seizing the presidency from Maduro, each less successful than the last. Even before the “Bay of Piglets” fiasco in May, he was supported by only three percent of Venezuelans.

The Amuay and Cardon refineries form the world’s second largest refining complex, capable of producing nearly one million barrels of gasoline per day, putting into perspective the enormity of the charges levied against Heath. Current oil production is far lower, however, due to mismanagement, and to U.S. sanctions, which greatly reduce the customers Venezuela has for its primary product. As the economy shrunk, poverty rose and so did shortages of key products. Large numbers of people simply left the country. And as sanctions bite, production levels have dropped to the point where there is even a gasoline shortage inside the country, causing long lines and much resentment at the government, the U.S., the opposition, and anyone in a position of authority. The COVID lockdown has led to reduced demand for oil, as citizens stay home as much as they can. Nevertheless, the destruction of the country’s largest oil refining complex would be a devastating blow to the society — all the more reason it might be targeted by those wishing to finally see an end to the socialist government.

Feature photo | Venezuela’s Attorney General Tarek William Saab holds a photo of bullets he says were seized with other weapons in connection with what the government calls a failed attack over the weekend aimed at overthrowing President Nicolás Maduro, during a press conference in Caracas, Venezuela, May 8, 2020. Matias Delacroix | AP