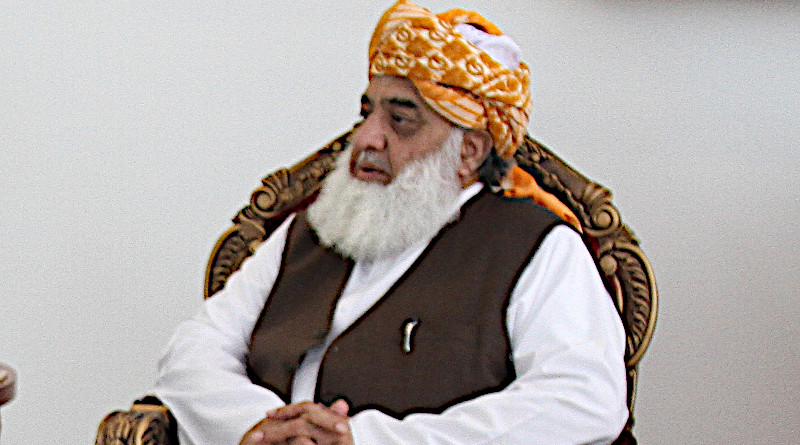 The political battlelines have been drawn in Pakistan. Arraigned on one side is virtually the entire opposition spectrum with Nawaz Sharif with his Muslim League (PMLN) and Maulana Fazlur Rehman with his Jamiat Ulema Islam (JUIF) in the vanguard of a motley crew of other opposition parties, including the Pakistan Peoples Party (PPP). On the other side is the Pakistan Army propping up its ‘selected’ Prime Minister Imran Khan and his party, Pakistan Tehrik-e-Insaaf (PTI), and his allies who have been corralled together to give him a wafer-thin majority in the National Assembly.

On paper, the opposing sides look evenly matched. But given the power differential and political realities in the Land of the Pure, the lay of the field seems to favour the military and its civilian minions, with caveats of course. Therefore, the question lurks: will the two sides plunge into battle, or will the opposition ranks take flight, even disintegrate, before the battle starts, leaving their leaders in the lurch? And, if indeed the 3M opposition alliance (Mian, Maulana and Motley Crew) takes on the 2M axis (Military and its Minions), who is likely to prevail? What are the prospects for the 3M forcing the other side to sue for peace? Will it be a stalemate (which too could benefit the opposition)? Or will the opposition be decimated and Pakistan left with a one party rule in which the military will rule while maintaining the façade of civilian rule through an obedient, obeisant and obsequious party like PTI?

A SWOT analysis of the looming political battle in Pakistan might offer some idea on how things are likely to pan out.

The wellsprings of the opposition’s strength lies in its popular support. Nawaz Sharif remains the most popular leader in Punjab, the province that functions like the controlling authority of Pakistan. He also has strong pockets of support in the Hazara belt of Khyber Pakhtunkhwa. Even in the worst of times, Nawaz Sharif’s support base remained intact. His charismatic daughter Maryam is a force multiplier and is able to attract crowds like few other politicians in Pakistan can. What PMLN lacks is street power. The party can get crowds out at rallies and in the polling booths, but its supporters aren’t exactly known for having a stomach for street fighting. This is where Maulana Fazlur Rehman becomes a force multiplier.

The wily and wise Maulana has strong pockets of support in the Pashtun belt of Khyber Pakhtunkhwa and Balochistan. In addition, he controls the largest network of madrassas in Pakistan. He might not have the votes that Nawaz Sharif has, but what he lacks in votes, he makes up in the street power of his committed cadre and supporters. Together, the Mian and Maulana represent the confluence of not just Punjabi and Pashtun politics but also of the potent bazaar and clergy combine. Add to this the agglomeration of smaller political parties and movements like the Pashtun Tahaffuz Movement (PTM), Baloch nationalists, Pashtun nationalists like Awami National Party, Pashtunkhwa Milli Awami Party, and the now largely reduced to rural Sindh PPP, the 3M alliance has support throughout Pakistan.

Along with support, they have a cause, even grievance, against the military and its minions, which adds to their strength. Simply put, the 2M has overdone it by pushing the opposition parties against the wall, and creating a do-or-die situation for them. Maulana Fazlur Rehman is one of the most pragmatic politicians in the entire Indian subcontinent. For the last quarter century, the Maulana has never confronted the military. Even his fiery rhetoric against the US and in favour of the Taliban after 9/11 was part of an understanding with the then military regime of Pervez Musharraf. He profited from supporting Musharraf even as he made a public show of opposing the dictator. He understands power like few in Pakistan do and that is why he has always been open to an accommodation with the military. Until now, that is.

The military’s support for his bete noire Imran Khan is simply unacceptable to the Maulana. He simply cannot stand the sight of Imran, who reciprocates the sentiment. Nawaz Sharif too, despite his frequent run-ins with the military, has always been seen as a pro-establishment politician. But now both the Mian and Maulana seem to have burnt their bridges with the current military leadership, and feel they are left with no choice but to direct their attack against the military in order to get rid of the military’s minions. The fact that the Mian and Maulana have a solid base in Punjab and Khyber Pakhtunkhwa from where the bulk of the military’s rank and file come, is something that should seriously worry the army.

The weaknesses of the 3M alliance stem from both structural and systemic factors. Firstly, the opposition alliance is united in their objective of seeing the back of the ‘selected’ government and to an extent taking back political space encroached on by the military. But beyond the common objective, there are serious political and ideological differences between these parties. There is also a serious trust deficit between them. The military has already tried to undermine the opposition alliance by leaking details of how opposition leaders have surreptitiously held meetings with them to seek relief. But this tack has apparently backfired on the military – Nawaz Sharif has expressly forbidden any contact at any level with any military official without his permission and the rest of the opposition seems to be resisting the military’s line on annexation of Gilgit Baltistan. There is also the question of how far PPP will go in supporting the 3M plan of action. Out of all the opposition parties, PPP has the most to lose – its government in Sindh. But because the ‘selected’ government hasn’t cut any slack for the PPP leadership, there is an incentive for the party to make common cause with other opposition parties. Asif Zardari has proven one thing over the years. He can do something entirely unthinkable and unpredictable – for instance, his alliance with PMLQ which he had at one time called Qatil League and blamed for the assassination of Benazir Bhutto. The bottom line is that there is a possibility that some of the parties in the opposition could cut side deals with the military and try to sabotage the movement from inside.

The second weakness is that there isn’t exactly a second or third line leadership that can maintain the momentum of agitation and bring out the crows in rallies and into the streets if the top rung leadership is incarcerated, as is likely to happen. For any movement to be successful against an entrenched ‘establishment’ the second and third rung leadership should be able to strategize and operationalise things on the ground. Whether this can happen is a big question, more so because some of the second and third rung of many of these parties aren’t exactly enthused over the prospect of taking on the military. They would rather take a few crumbs thrown at them than confront the military. Sitting in self-exile in London, Nawaz Sharif can be all fire and fury, but whether he will be able to direct his followers and supporters on ground in the face of a brutal crackdown by the ‘establishment’ remains to be seen. If he can’t, and if the Maulana’s people are bottled up, then the movement could fizzle out even before it starts. Already there are signs of desertions in the PMLN. The military and the government will pull out all stops to engineer splits in the opposition parties. Whether this will be enough to stall the movement is another matter, but it will certainly create a perception of the opposition ranks being denuded.

Third, the media is another force multiplier in this sort of political battle. But the media has been completely muzzled in General Bajwa’s Pakistan. Already, instructions have been issued to not air speeches of ‘absconders’ (read Nawaz Sharif). The Maulana’s speeches and interviews have often been censored. While social media can fill some gap, but whether it can replace the mainstream media is another of the imponderables. Finally, historically, no movement against a sitting government in Pakistan has been successful without some support from a section of the establishment which then makes for media support and merchants bankrolling it. There is no evidence of such a support as yet. If despite this, the 3M is able to pull down Imran Khan, then it will set a new precedence.

The opportunity is ripe. There is discontent in the public because of feckless governance and economic mismanagement. The opposition parties have an incentive to pull down the government and challenge the current system. There is a small window open – until March next when the Senate elections take place and give Imran Khan the numbers to completely deform the already distorted constitution of Pakistan. There are also unconfirmed reports of some carping sounds within the military about how continuing with the current dispensation is now yielding diminishing return and proving to be counterproductive. The situation is therefore ripe for the strike, provided the opposition is up to the task, which is not going to be easy.

The main threat to the opposition movement is partly endogenous (explained above) and partly exogenous. First, there is no real incentive for the military to get rid of Imran Khan, especially since there is no clear or viable alternative available. Also, until the opposition can force the military to pull its support for Imran Khan, why should it? Second, if push comes to shove, the military might decide to end the charade of democracy and take over power directly. This would mean another decade or so of military rule – a rather pyrrhic victory against Imran Khan. Third, with the endgame in Afghanistan playing out, will the opposition be able to garner the international support it needs to ensure that the military isn’t able to ride roughshod over their agitation? And finally, if the military were to initiate some limited action against India – the Line of Control has been heating up and there is a chance of Pakistan jumping in if there is some deterioration on the India-China front (Pakistan could even trigger something that could then escalate on both India’s western and eastern front) – it would force the opposition to rally behind the military and end its agitation.  The next few weeks are going to be crucial in determining if the opposition movement will pose a serious challenge to the military and its ‘selected’ Prime Minister, or whether all its talk is just hot air.

The views expressed above belong to the author(s).

The article Mian And Maulana Versus The Military In Pakistan – Analysis appeared first on Eurasia Review.