When Donald Trump’s tax returns leaked two weeks ago, they were damning in their own right – but they felt like just the first of many shoes to drop when it came to Trump’s finances. Sure enough, now some of the specifics of Trump’s financial house of cards are starting to surface, and the whole thing is looking uglier by the minute.

When Donald Trump was broke during his 2016 campaign and Deutsche Bank cut him off, he suddenly received a $21 million one-off payment from his Las Vegas hotel, according to a New York Times expose today. During that same time period Trump donated $10 million to his campaign, which was also broke. This is a big deal, because if the money that came from the hotel is the same money that he gave to his campaign, that’s an illegal campaign contribution, and he committed a felony.

It’s not at all surprising to learn that Donald Trump committed a financial felony. We all know he’s committed hundreds or thousands of financial felonies over the years. But whereas some forms of financial fraud are tricky to prove, campaign finance fraud is generally cut and dry. This $21 million from the hotel is precisely the kind of crime that Trump will be tried and convicted for, once he’s out of office. And even if Trump manages to pardon himself on the federal crimes, the state level criminal charges are also waiting for him. 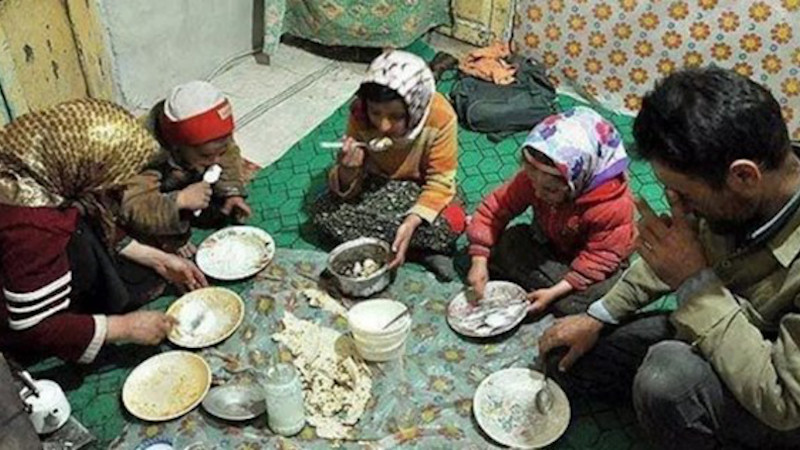 According to new official figures, half of Iran’s population live in absolute poverty. The report published by the Statistical Center of Iran also said that Iranians were not able to buy basic groceries. Average Iranians eat 52% less red meat, while those with lower incomes eat 65% less red meat compared to last year, the report said.  Iranians are also eating 34% less rice, the country’s staple food.

Nine years ago, in 2011, only 18% of the population lived in absolute poverty. Last year, this figure increased to 35%.

#Iran labor official: A worker’s salary finishes in 10 days/can’t afford cheese let alone meat/can’t afford a home even after 200 yrs. Regime elites are getting richer while 60mln Iranians live under the line of poverty. These are the effects of 41yrs of corruption.

Sixty million Iranians live under the line of poverty due to the regime’s systematic lack of supervision over the economy, an Iranian economist said.

Speaking to Tabnak, a website affiliated with the regime, Ibrahim Razaghi said “the most important threat to Iran was extreme poverty, widespread unemployment, the inability of many people to pay their rent, and that the rich were getting richer.”

“There are currently 30 million unemployed people and 60 million people live below the poverty line,” he said adding that the economic situation was “very bad.”

According to state-run media, more than 19 million Iranians live in 3,000 slums and make up the 35% of Iran’s urban population.

This is while Iran’s regime elites live in luxury, in Tehran’s Lavasan region, dubbed the “Beverly Hills of Iran”.

Iran’s poverty will turn to protests

Officials fear that widespread poverty in Iran will soon turn to major protests, the likes of which were seen in November 2019, which shook the foundations of the regime.

On September 1, Hossein Zolfaghari, the Head of the Security and Law Enforcement Department of Iran’s Ministry of Interior said protests calls in the country had increased three-fold compared to last year.

A regime-affiliated university professor told the state-run Etemad Online website that the government’s lack of attention to public demands was extending the split between the government and the people.

“The subverters will dwell in this split and will allow themselves to try to overthrow the government and take power,” Bijan Abdolkarimi added.

Referring to the major protests in November 2019, he said “we will definitely see more of these protests” in the future.

The article Half Of Iran’s Population Live In ‘Absolute Poverty’ appeared first on Eurasia Review.

I was honored to receive the first ever Presidential Endorsement from the Florida Police Chiefs Association. Thank you, I will NEVER let you down! @FloridaChiefs #LESM pic.twitter.com/R2RauC59a5

Trade wars are not so easy to win after all. The president’s much-touted tariffs haven’t helped furious steelworkers hang on to their jobs.

My interview with the president this evening!  Please share it with everyone you know!
marklevinshow.com/2020/10/09/mar…