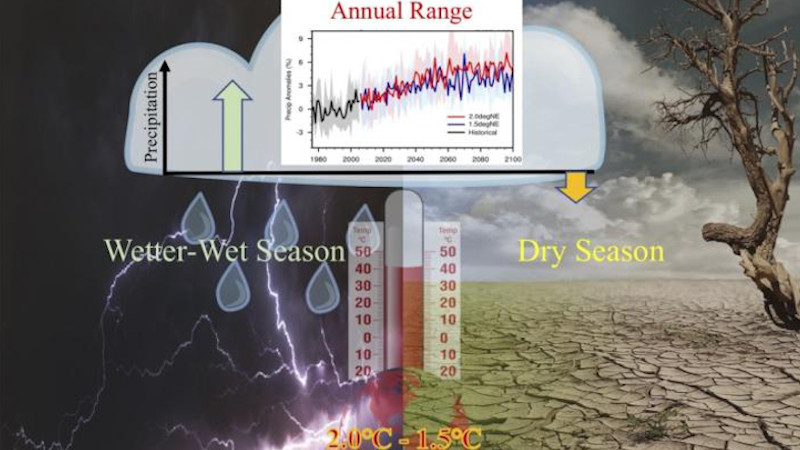 A recent work published in Earth’s Future by a team of researchers from the Institute of Atmospheric Physics (IAP) at the Chinese Academy of Sciences has found that the seasonal cycle of precipitation is likely to enhance at stabilized 1.5°C and 2°C warming scenarios.

“Based on the output data of the Community Earth System Model low-warming experiment, we conclude that the enhancement is mainly caused by the increase in water vapor,” said Ziming Chen, the first author of the study and a doctoral student from IAP.

“In our study, the intensity of the seasonal cycle is represented by the difference between mean precipitation in the wet and dry seasons for different regions and for each year,” said Chen.

CHEN and his collaborators in IAP found that based on the above metric, the intensity of seasonal cycle would enhance by 3.90% and 5.27% under 1.5°C and 2°C warming. Under the additional 0.5°C of warming, a pronounced enhancement in seasonal cycle occurred over 22% of the land regions.

The enhancement was associated with the enhanced precipitation during wet season, caused by thermodynamic responses due to the increased moisture. It indicated that the contrast between the wet and dry seasons would become stronger, resulting in a more uneven distribution of freshwater resources within a year. The probability of flooding would increase in the wet season.

“This study emphasizes the pronounced enhancement in seasonal cycle over land regions associated with the additional 0.5°C warming, despite the insignificant increases in the annual precipitation,” added Chen. “Though the number in temperature seems small, 0.5°C still matters.”