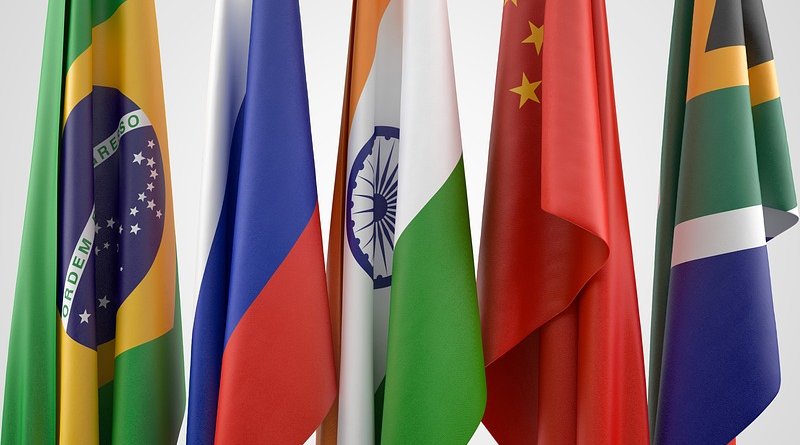 The BRICS summit, which was to be held in St. Petersburg in July, is scheduled to take place in Russia in the autumn. This was announced by the Minister of Foreign Affairs of Russia Sergey Lavrov.

“We will determine the dates [of the Summit] later based on the epidemiological situation,” he said at a news conference following an online meeting of the BRICS Foreign Ministers Council September 4, which, under the Russian chairmanship, became the second such meeting this year: the first was devoted to the tasks of mobilizing efforts to effectively prevent the spread of coronavirus infection. The Summit was later scheduled for November 17.

According to Sergey Lavrov, the ministers discussed a wide range of international issues and key items on the agenda of the 75th session of the UN General Assembly as well as practical cooperation among the five member states, and have adopted a detailed and appropriate final communiqué that reaffirms the BRICS’ commitment to the principles of multilateralism and reliance on international law.

“In this year of the 75th anniversary of Victory in World War II, we noted the importance of preserving the historical memory of this tragedy’s lessons in order to avoid repeating it in the future. We unanimously condemned any and all manifestations of Nazism, racism and xenophobia. The corresponding resolution that is adopted annually by the UN General Assembly is traditionally supported by all BRICS countries. We agreed to strengthen and promote our strategic partnership in all key areas of BRICS activities, such as politics and security, the economy and finance, and cultural ties,” the Minister of Foreign Affairs stressed.

“We are grateful to our friends for supporting Russia’s chairmanship of the Five under rather difficult circumstances, when direct international communication, face-to-face communication, has, in fact, been put on hold. Nevertheless, using modern technology, we have managed to carry out most of the planned activities. We have had over 50 activities and as many will take place before the end of the year. We have every reason to believe (our partners also mentioned this today) that all of the Russian chairmanship’s plans with regard to the BRICS activities will be fulfilled,” he added.

Answering journalists’ questions about the results of the work done this year, Sergey Lavrov said that he considers it critically important to have reached an agreement on a number of issues.

“This includes a package of documents devoted to trade and investment, encouraging small-, medium- and micro-businesses to participate in international trade, strengthening cooperation between banks (central banks and development banks in our respective countries), and the active work of the New Development Bank, which was created by the leaders of the BRICS countries and is operating successfully.) By the way, the Eurasian Regional Centre of the New Development Bank will open in Russia in October,” the Minister of Foreign Affairs said.

In addition, he noted the great importance of the agreements related to the prevention of new challenges and threats.

“A very powerful document on counter-terrorism has been agreed upon and will be submitted for approval by the heads of state. The activities to combat drug trafficking and drug crime have been resumed. Our joint cybersecurity efforts are on the rise. This is a critical area to which we pay special attention,” Sergey Lavrov reminded.

“Notably, special attention was paid to Russia’s initiatives, which were presented a year ago, and that supplemented BRICS’ activities with two new formats. I’m referring to the Women’s Business Alliance (it has been effectively created and is about to go live) and the Energy Research Platform, which is designed to encourage the research community’s involvement in the practical activities on drawing up energy resource plans. Two major events have taken place as part of the Energy Research Platform. Their results will also be submitted for consideration by the heads of states,” he said.

Commenting on the importance of BRICS in the context of global transformations in the world, Lak Chansok, Lecturer and Research Fellow, Department of International Studies, Royal University of Phnom Penh (RUPP), Cambodia, Expert at Ritsumeikan Center for Asia Pacific Studies, Ritsumeikan Asia Pacific University, stressed that this interstate association has indeed been an integral part of the global geo-economic and geopolitical landscapes in the 21st century.

“It has done a lot of progressive and developmental works ranging from geopolitical to socioeconomic issues, centring on the South-South cooperation without participation of the West and the United States,” the expert said.

According to him, the joint work of the BRICS countries is complicated by a number of internal challenges caused by economic inequality, political differences and geopolitical diversity, but this does not diminish the importance of the autumn summit.

“First, the platform will be utilized to reassess BRICS’s existing cooperation frameworks and strategies. Under the theme “BRICS Partnership for Global Stability, Shared Security and Innovative Growth,” the Submit this year will touch upon discussions pertaining to challenges, opportunities and ways forward to promote the UN’s roles and especially the 2030 Sustainable Development Goals (SDGs) including promoting global health and environment. Second, for security, aligning with Russia’s proposed BRICS+ mechanisms, the forthcoming Summit will include five foreign ministers’ and the National Security Advisors (NSA)’ meetings, […] that are crucial to normalize Sino-Indian stained bilateral relations and promote strategic trust among the members. Third, economic and innovative growth is of increasing significance to all members as their economy has been more or less affected by the COVID-19 pandemic,” Lak Chansok noted.

In his opinion, the future development of the BRICS largely depends on how its members deal with geo-political differences, as well as reinforce and institutionalize their grouping to reshape the current international system.

“Since its inception, BRICS has gradually received more attentions from the world. The BRICS Bank continues enhancing its two institutions, the New Development Bank and the Contingent Reserve Arrangement, which have been seen to challenge the existing West-dominated IMF,” the analyst said.

Meanwhile, Leonardo Ramos, Department of International Relations, the Pontifical Catholic University (PUC) Minas in Brazil, noted that BRICS has had an important role in international politics.

“Particularly, it has contributed in an important way to the dialogue between China and Russia, promoting proximity and cooperation between them. Also, it guarantees an institutional place to India and China meet, which has a potential role to promote the dialogue between them. […] BRICS could provide a platform to China put its position and aims [connected with trade relations with the US], in special to Russia and India,” he explained.

According to Leonardo Ramos, in the contemporary conjuncture, two situations are very important to BRICS: tensions between China and US and international cooperation in a pandemic context.

“One of the goals of BRICS is to promote a multipolar world. However, its role in redefining and restructuring the architecture of international relations is limited,” he said.

According to him, the COVID-19 pandemic has adversely affected not only the international system but also BRICS forcing the leaders to postpone the Summit.

“Unfortunately, unified and concerted global and regional strategies to tackle the pandemic could not be put together. The pandemic has exposed the fault lines among the countries,” Varaprasad Dolla said.

In his opinion, the bilateral disagreements between China and India may negatively affect the future of the entire association, therefore it is extremely important for the parties to work out solutions to improve relations between all BRICS members.

Meanwhile, Termsak Chalermpalanupap from the Institute of Southeast Asian Studies, Singapore, drew attention to the fact that BRICS has great potential, which is still not fully explored.

“It is definitely crucial for the BRICS Leaders to meet as soon as possible. The world wants to see great leaders come together to help solve global problems,” the analyst said, stressing that the BRICS group has the potential to provide effective global leadership in inventing and mass-producing anti-COVID-19 vaccines.

“Unfortunately, the prospects of the BRICS are not so bright, mainly because of the COVID-19 pandemic, and partly because of the lingering border tensions between China and India. We are waiting to see how the Russian President will be able to help mediate between China and India, since he has good relations with leaders of both countries,” Termsak Chalermpalanupap added.

At the same time, in his opinion, after the pandemic, states will have to return to global interaction and contacts.

“In this ‘new normal world’ we need to intensify multilateral cooperation for common global interest and well-being of mankind. We can no longer depend on the US or the EU for global leadership. Therefore, the BRICS is a third alternative that we, peoples of the world, are looking towards for wise and magnanimous leadership,” the expert said.

Professor Harun Ozturkler, Faculty of Economic and Administrative Sciences, Department of Econometrics, Kırıkkale University, stressed that each country in BRICS group is regionally and globally powerful from military, politic and economic standpoints.

“However, its future as an international union will depend crucially on the role it will play during and post covid-19 era. It is now clear that covid-19 triggered the emergence of a new world order. This new international order is evolving with a new mode of shortened globalization, localization, and rising nationalism. […] Therefore, BRICS Summit this autumn is vitally important because it provides a platform for the group to review its past performances and set up new strategies for the future. BRICS Summits have proved to be the key for BRICS’ success in creating its cooperative construction,” he said.

According to him, BRICS’s strategies that are bound to be developed during the coming autumn Summit will have significant ramifications in shaping the post COVID-19 era world order.

“Its members’ combined economic and political power is undoubtedly paramount in addressing any global challenges. However, as the world is reeling under the catastrophic effects of COVID-19 pandemic, which may last many forthcoming decades, BRICS countries must undertake a leadership role in combating these adverse effects of the pandemic,” the Turkish expert noted.

From his point of view, the worst effects of the pandemic are unemployment, underemployment, and food security, which will deepen social vulnerabilities, creating worldwide social unrests.

“BRICS countries now must show that the union’s power is not presentational but practical and their collective efforts can mobilize worldwide cooperation in creating necessary resources to tackle global challenges, not only the pandemic but also environmental issues, development matters, and rising inequalities,” Harun Ozturkler concluded.