We translated this story into different formats:

This article was produced in partnership with the Arizona Daily Star, which is a member of the ProPublica Local Reporting Network.

Drew Bolender is 41 years old. He lives in Phoenix, Arizona, with his mom. His mom’s name is BJ.

Drew has hydrocephalus and brain damage. Hydrocephalus means there is extra liquid in Drew’s brain. Drew has seizures too.

Drew used to live in a group home. He moved back in with his mom in 2008. Drew had spinal surgery in 2017. Drew has a lot of pain since the surgery.

Drew gets help taking care of himself. His helpers are called caregivers. Drew’s caregivers help him all the time. They help him at night. They are paid by the Division of Developmental Disabilities.

The Division of Developmental Disabilities is also called DDD. A worker at DDD told Drew’s mom she should put him in diapers. No one would need to help him use the bathroom at night. This would save money.

Drew’s mom was very angry. She asked DDD, “You are going to ask an adult who is not incontinent to wear a diaper?” Incontinent means not being able to use the bathroom on your own. Drew’s mom does not think he needs diapers.

DDD and Drew’s mom were supposed to have meetings about Drew this summer. The workers from DDD did not come to the meetings.

Drew’s mom said, “Families get so overwhelmed and stressed out that they just give up and go away.”

Workers at DDD said most people get help fast, and they are happy with the help they get. They did not say anything about Drew. 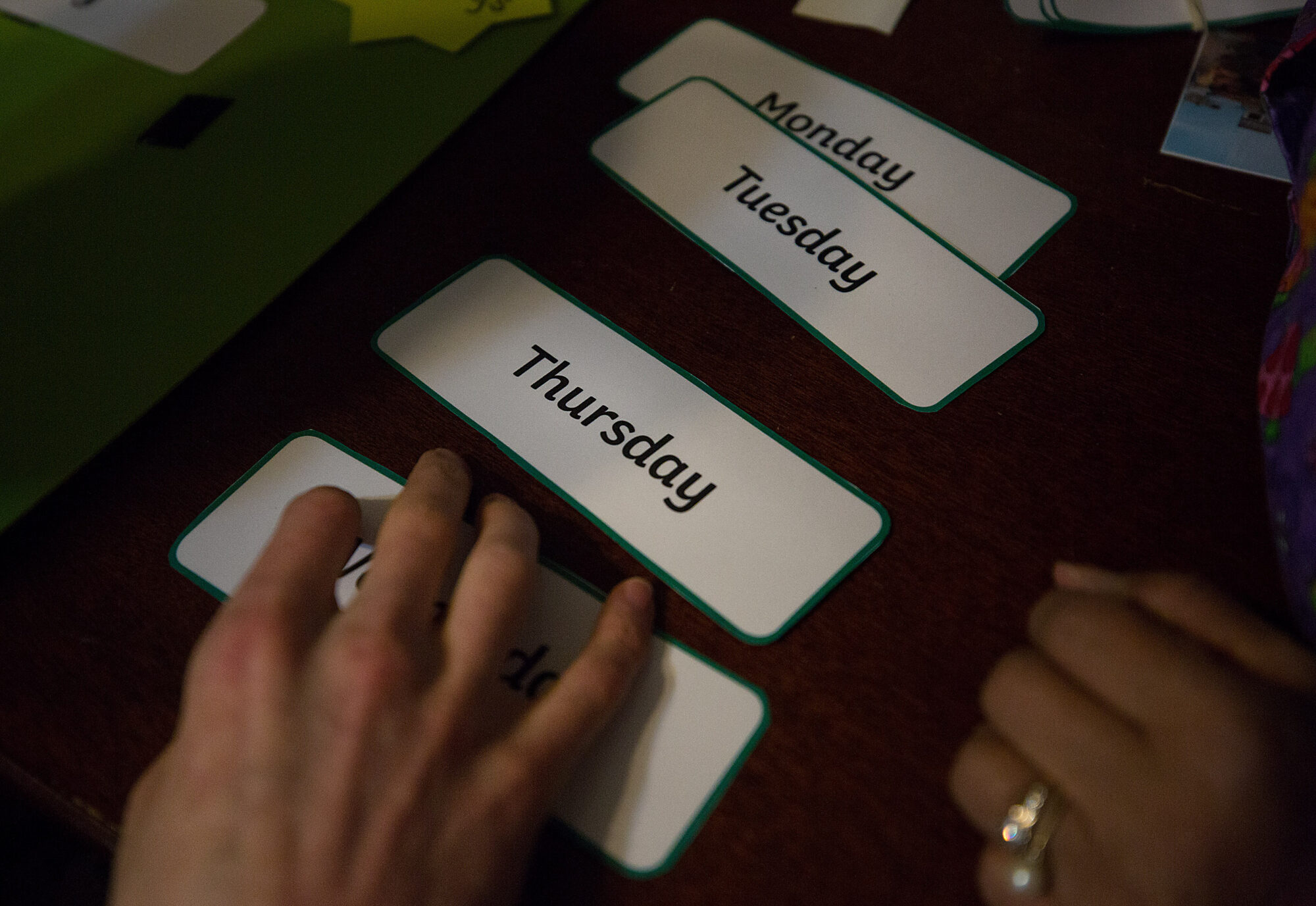 Drew has Alzheimer’s. He practices the days of the week with his caregiver.
Mamta Popat/Arizona Daily Star

Drew has caregivers to help him at night until December. Drew and his mom do not know if he will have caregivers at night after that.

Drew’s mom is worried about not having caregivers to help Drew all the time.

Drew’s mom has helped Drew his whole life. She helps at doctors’ appointments. She makes sure he gets the medication he needs. She trains Drew’s staff. She shops and cooks. She is paid a little money to be Drew’s caregiver.

She said: “I got my doctorate in Drew a couple years ago. I had my master’s in Drew when he was a teenager.” That means she knows a lot about what Drew needs.

Drew’s mom may have to stay up all night to help Drew.

She worries about who will help Drew when she dies. Drew thinks about dying too.

Drew was interviewed for this story. He was friendly and talkative. He had a big smile and light brown hair. Sometimes he started sentences he didn’t finish.

Drew said he wants to “stay alive as long as possible.” He wants to have a “gold casket” when he dies.

When Drew is in pain, he plays games or watches YouTube. When he feels good, he lifts weights. He wore a tank top to his interview. It showed off his muscles.

Drew told his mom he wants to donate his body to science. He asked his mom if she would ever help him die. This is called assisted suicide.

Drew’s mom thinks Drew is smart for thinking of this idea. It made her sad too. She said: “It’s so tragic and gut wrenching and at the same time, oh my God, he put it together. It’s like, wow.”

She is happy to spend time with Drew.

Drew’s mom is 69 years old. She is not as strong as she used to be. She thinks Drew is getting worse.

Drew can fall and hurt his head unless someone helps him get up. Drew’s mom thinks he forgets he can’t walk by himself.

In September, Drew’s mom said she got hurt helping Drew when he fell. She said:

“He still has a lot of pain so his Alzheimer’s behaviors [are] worse. I had to cover overnight last night and Drew fell twice. To save him I hurt [my] back and this a.m. realized I think I broke 3 toes. Trying to work out getting to Urgent Care and also get a caregiver to cover me 6-9 p.m. for Drew.

Reality when you care for a dependent, eh?” 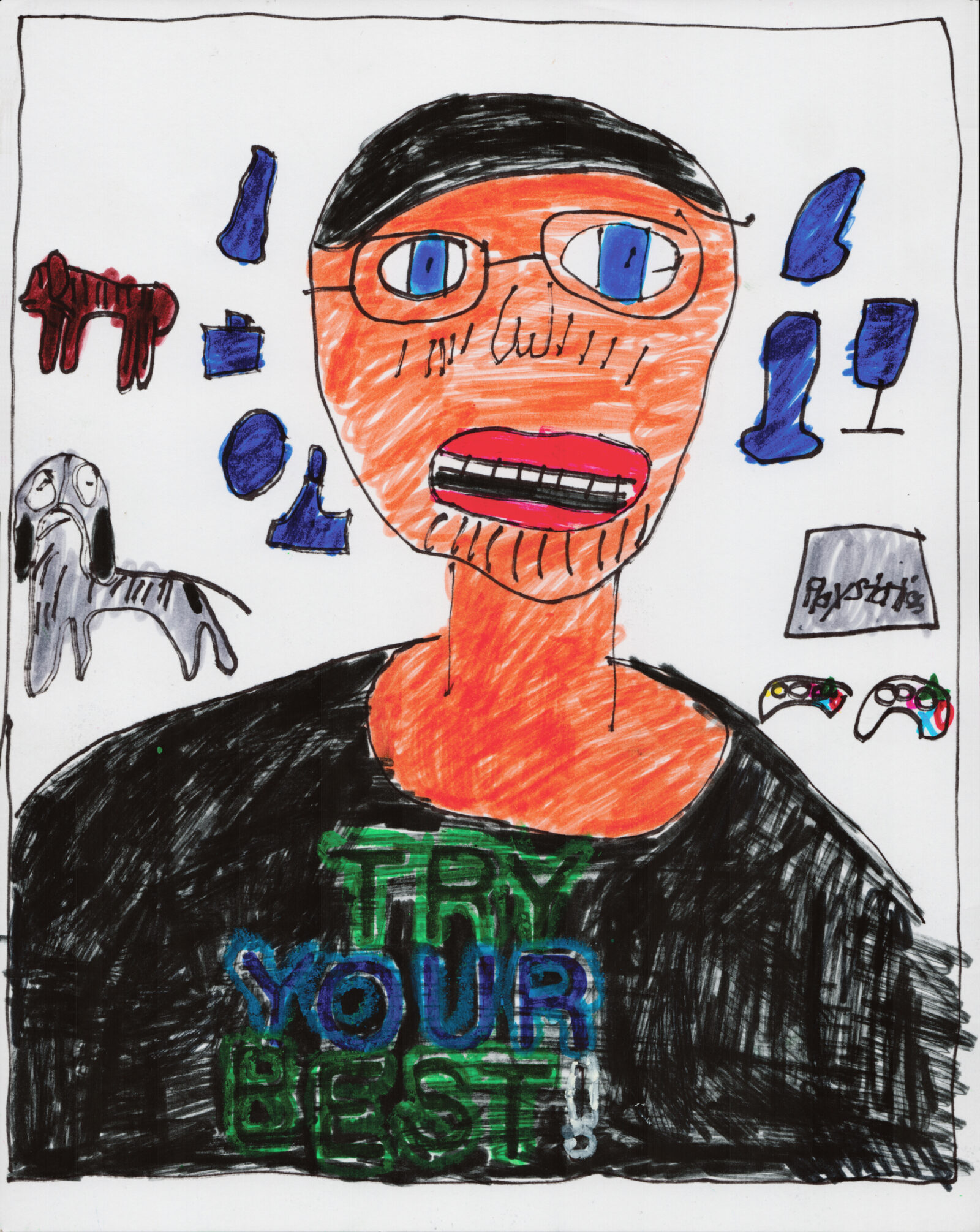 Doctors have asked Drew’s mom why she doesn’t put him in a nursing home.

Drew’s mom does not think it’s time for Drew to be in a nursing home. She thinks Drew has a good life. He might go to a nursing home if his health gets worse.

Drew’s mom says most of the time he is fine. She said, “75% of every day, Drew is fine, able to function, able to eat, able to enjoy music, able to use his computer, able to exercise.”

Drew’s memory is getting worse because of Alzheimer’s. He still remembers many things though.

Drew went to the hospital recently. He was happy because he knew one of his nurses at the hospital.

Drew asked, “Guess who was my nurse at one time?”

He said, “All it took was a shot of the eyebrows. I’m like, ‘Courtney, is that you?’” Courtney used to be Drew’s caregiver.

Drew and his mom went to the Freddy’s drive-thru. They got cheese curds.

Drew’s mom said: “Drew loves going for a ride. We can’t get out of the car [because of COVID-19], but he loves leaving the house and during the time he’s in the car he’s not complaining, he’s quiet, he’s listening to music on the radio, he’s calm.”

Drew’s mom said to listen to the lyrics.

The lyrics to the song are:

Drew is part of his community. That is the goal of home and community-based services.

Drew’s mom said, “If you had a family member and 75% of the time their pain was managed, they had normal conversations, enjoyed their outings and enjoyed their TV shows, would you put that person in a nursing home?”