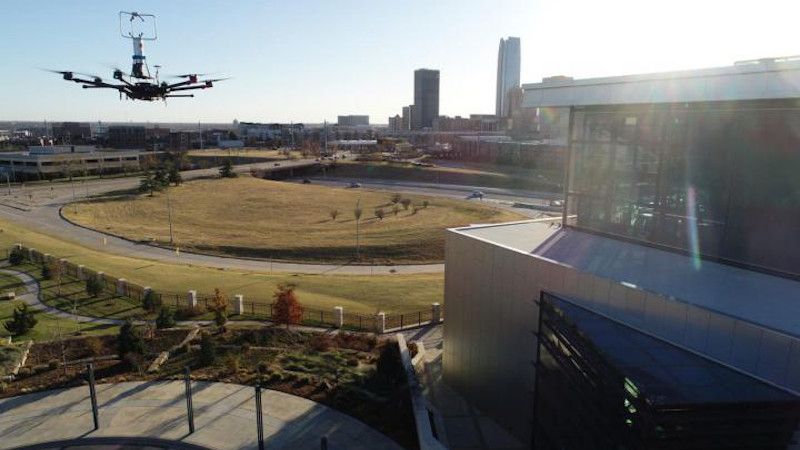 Global population and urbanization have boomed over the last few decades. With them came scores of new tall buildings, drones, more energy-efficient ventilation systems, and planned air taxis by Uber and other companies. But these technological advancements must contend with a natural physical phenomenon: wind.

Scientists presented the latest findings on modeling and predicting urban airflow–in the hope of building better buildings, cities, and transportation–at the 73rd Annual Meeting of the American Physical Society’s Division of Fluid Dynamics.

The urban skies of the future could teem with autonomous aircraft: air taxis, drones, and other self-flying systems. A team from Oklahoma State University has developed techniques to model environmental hazards these vehicles might encounter so they can safely navigate cities.

Researchers attached sensors to robotic aircraft to take more cohesive measurements of building wakes, or the disturbed airflow around buildings. They combined this data with numerical predictions to get a better picture of the complex wind patterns found in urban environments.

The work could help improve wind and weather forecasting, not only for unmanned aircraft but also for conventional airplanes.

“The potential of outfitting every drone and urban air taxi, as well as other aircraft, with sensors provides a game changing opportunity in our capability to monitor, predict, and report hazardous weather events,” said Jacob.

Another group, based at the University of Surrey also investigated building wakes. With an eye toward enhancing air quality in cities, they looked for wake differences between a single tall building and a cluster of tall buildings.

“Understanding how to model the wake of tall buildings is the first step to enable city planners to reduce the heat-island effect as well as improve urban air quality,” said Joshua Anthony Minien, a researcher in mechanical engineering.

The team carried out experiments in a wind tunnel, varying the grouping, aspect ratio, and spacing of tall buildings. They were encouraged to see that when measured far enough downstream, a cluster of buildings and an isolated building have similar wake characteristics. Changes to wind direction also seem to significantly affect the wakes of clusters of buildings.

All buildings, tall or not, must be ventilated.

“The ability to predict ventilation flow rates, purging times and flow patterns is important for human comfort and health, as highlighted by the need to prevent the airborne spread of coronavirus,” said University of Cambridge researcher Nicholas Wise.

With engineering professor Gary Hunt, Wise found a problem in current models of passive natural ventilation systems. These often use displacement flow–where cooler night air enters a building through one opening and warmer air accumulated during the day exits through another opening.

Their mathematical modeling revealed that displacement flow does not continue during the purge of warm air, as was believed. Instead, the room experiences an “unbalanced exchange flow” which can slow down the purging process.

The researchers were surprised at just how much adding a small low-level opening speeds up room cooling, compared to a room with only a high-level opening. Their model will be useful for designers of natural ventilation systems.

The article The Science Of Windy Cities appeared first on Eurasia Review.