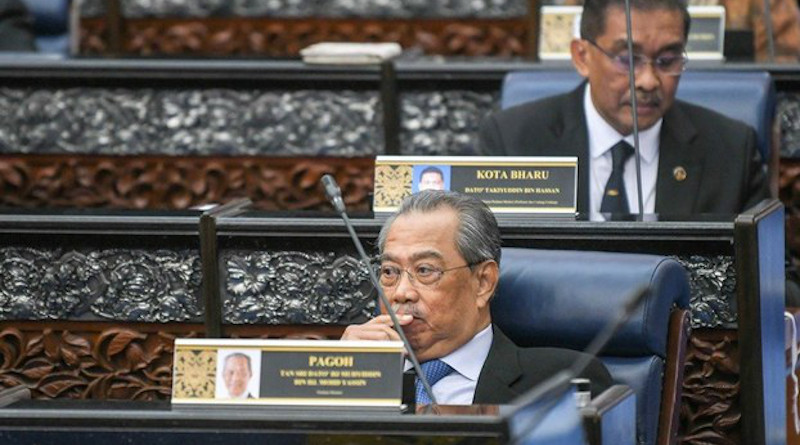 Malaysian Prime Minister Muhyiddin Yassin passed a parliamentary hurdle seen as crucial to his political future, as a majority of lawmakers voted Thursday in favor of his government’s 2021 budget.

The passage of the proposed 322.5 billion-ringgit (U.S. $78.1 billion-) spending plan through a voice vote gave Muhyiddin a victory in the first stage of a three-part approval process. Its defeat would be the same as a vote of no-confidence in his nearly 9-month old government, analysts have said.

“The 2021 budget is the largest and most important budget for the country and this support enables the government to implement all spending plans for the next year in an orderly and smooth manner,” the prime minister said after lawmakers verbally endorsed the spending plan. It was not immediately known how many MPs voted for or against the budget bill.

Muhyiddin’s government is clinging to a razor-thin parliamentary majority as Malaysia contends with a resurgence of coronavirus infections and economic ripple effects from the pandemic. The crisis first became full blown in Malaysia soon after his unelected government took office in early March.

Muhyiddin thanked lawmakers who backed the 2021 spending plan. He said they displayed maturity by putting the welfare and safety of the Malaysian people first during the public health crisis.

The budget, when introduced by Finance Minister Tengku Zafrul Aziz for debate on Nov. 6, earmarked at least 17 billion ringgit ($4.1 billion) for efforts to combat the pandemic and help the economy bounce back from it.

After Thursday’s vote, however, opposition leader Anwar Ibrahim warned that the bloc would put up a tougher fight on the parliamentary floor during a second stage of debating and voting next week.

While the finance minister “completely ignored some substantive issues” as well as six demands made by the opposition Pakatan Harapan coalition, Anwar said the minister did announce additional grants and allowances to frontline workers in the fight against the pandemic as well as to farmers and fishermen.

“I think for now we should allow him to go on … but there is no guarantee that it will get approved … we will certainly choose to reject and call for revision where deemed necessary,” Anwar told reporters.

The voice vote took place on Thursday after only 13 opposition lawmakers demanded a headcount vote. Parliamentary procedures stipulate that a headcount vote can only happen when a minimum of 15 MPs call for one.

With “more voices agreeing, the bill will now go to the committee stage,” House Speaker Azhar Harun said after the voice vote was taken.

“Al-Sultan Abdullah welcomes the support given for the passing of the 2021 Budget to ensure the wellbeing and continuation of the public’s livelihood as well as the recovery of the country’s economy that is being affected by the spread of the COVID-19 outbreak,” the National Palace said in a statement.

In late October, the king rejected a request by Muhyiddin to declare a national state of emergency over the pandemic. The move could have led to parliament being suspended ahead of the debate on the proposed budget – the first legislation introduced under Muhyiddin’s leadership.

The king later urged politicians from across the spectrum to set aside their political differences and pass the budget for the people’s sake.

The opposition can still vote to block the bill’s passage at the later stages but Anwar and his side lost momentum in that regard through the outcome of Thursday’s voice vote, according to Oh Ei Sun, a senior fellow with the Singapore Institute of International Affairs.

“[T]he steam is somewhat lost after the first stage win to the government,” Oh told BenarNews.

James Chin, an analyst with the University of Tasmania, said he was not surprised that the budget succeeded at this parliamentary stage.

“It’s the same thing every year. The government proposes something, and they will modify it after the debate process … the budget will be passed. And that is what’s going to happen,” Chin said.

The bill is slated to be debated again on Nov. 30.