Mink may be host of coronavirus’ origin: China’s ‘Bat Woman’ 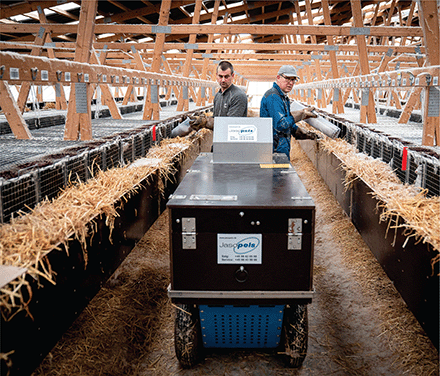 A mutated strain of severe acute respiratory syndrome coronavirus 2 (SARS-CoV-2) has been found in mink farms, such as this one in Naestved, Denmark, causing a mass cull in November 2020.

Severe acute respiratory syndrome (SARS), Middle East respiratory syndrome (MERS), and COVID-19 all broke out in recent decades and are caused by different strains of coronavirus (CoV). These viruses are considered to originate from bats and to have been transmitted to humans through intermediate hosts. SARS-CoV was identified in palm civets in wildlife markets and MERS-CoV in dromedary camels (1), but the direct source of the COVID-19 causative agent, SARS-CoV-2, is still undetermined. On page 172 of this issue, Oude Munnink et al. (2) report an in-depth investigation of SARS-CoV-2 infections in animals and humans working or living in 16 mink farms in the Netherlands.

SARS-CoV-2 infections were detected in 66 out of 97 (68%) of the owners, workers, and their close contacts. Some people were infected with viral strains with an animal sequence signature, providing evidence of SARS-CoV-2 spillover back and forth between animals and humans within mink farms.

Besides mink, multiple species of wild or domestic animals may also carry SARS-CoV-2 or its related viruses.

Experimental infections and binding-affinity assays between the SARS-CoV-2 spike (a surface protein that mediates cell entry) and its receptor, angiotensin-converting enzyme II (ACE2), demonstrate that SARS-CoV-2 has a wide host range (3). After the SARS-CoV-2 outbreak, several groups reported SARS-related CoVs in horseshoe bats in China and in pangolins smuggled from South Asian countries, but according to genome sequence comparison, none are directly the progenitor virus of SARS-CoV-2 (4).

Domestic cats and dogs, as well as tigers in zoos, have also been found to be naturally infected by SARS-CoV-2 from humans, but there is no evidence that they can infect humans, and so they are unlikely to be the source hosts of SARS-CoV-2 (4, 5).

To date, SARS-CoV-2 infections in mink farms have been reported in eight countries (the Netherlands, Denmark, Spain, France, Sweden, Italy, the United States, and Greece), according to the World Organisation for Animal Health (6).

It was found that viral genome signatures in these outbreaks were different from the viral strains present in China (7, 8). There is evidence that SARS-CoV-2 can survive up to 3 weeks in meat and on the surface of cold food packages without losing infectivity (7, 8).

Thus, meat from SARS-CoV-2–infected animals or food packaging contaminated by SARS-CoV-2 could be a source of human infection (see the figure).

This raises concerns about public health and agriculture in the prevention and control of SARS-CoV-2. Most SARS-CoV-2–infected animals do not display an obvious clinical syndrome, and infections would be unrecognized without routine diagnosis. The massive mink culling of infected farms is an efficient way to prevent further transmission of the virus. However, it cannot be applied to all domestic animals (if other species are found to be SARS-CoV-2 hosts). Thus, out of caution, extensive and strict quarantine measures should be implemented in all domestic farms with high-density animal populations.

Because the virus is able to jump between some animals (such as mink) and humans, similar strategies should be applied to people in key occupations involving animal-human interfaces, such as animal farmers, zookeepers, or people who work in slaughterhouses.

Notably, there is limited evidence of animal-to-human transmission of SARS-CoV-2 except for mink.

Research on whether other domestic animals carry SARS-CoV-2, whether they can transmit it to humans, and factors related to spillover should be conducted.

The RNA genome of SARS-CoV-2 seems relatively stable during transmission within human populations, although accumulated mutations have been detected. It is generally accepted that coronaviruses tend to exhibit rapid evolution when jumping to a different species. To keep the replication error rate low, coronaviruses encode several RNA-processing and proofreading enzymes that are thought to increase the fidelity of viral replication. However, viruses tend to have reduced fidelity in favor of adaptation to a new host species (9), although the mechanisms underlying this phenomenon are unclear. The coronaviral spike protein is prone to have more mutations because it is the first virus-host interaction protein and thus faces the strongest selection pressure. This molecular evolution can be observed in SARS-CoV genomes, which were under more adaptive pressure in the early stage of the epidemic (palm civet to human) than in later stages (human to human) (10).

Mutations that occur in SARS-CoV-2 in animals may increase its pathogenesis or transmissibility in humans.

Five clusters of SARS-CoV-2 strains were found in mink, each characterized by a specific mink-related variant. In Denmark, the cluster 5 strain of mink SARS-CoV-2 was less immunogenic to COVID-19 patient serum than was human SARS-CoV-2 because of mutations of the spike proteins in the mink strains (11). This cluster 5 strain has infected at least 12 people, and the clinical presentation, severity, and transmission among those infected are similar to those of other circulating human SARS-CoV-2 strains (12). Currently, there is no evidence that any mutation from mink strains of SARS-CoV-2 escapes neutralization by antibodies designed to target the prevalent human strains. However, considering the possible risk of spillover of SARS-CoV-2 between humans and some animals, it is imperative to closely monitor mutations in the viral genome from infected animals and humans, particularly the genome regions affecting diagnostic tests, antiviral drugs, and vaccine development.

It is anticipated that vaccines will allow control of COVID-19. Vaccines have been developed against the current prevalent viral strains and could face challenges if there is continued spillover from animals.

The viral genome mutations likely produced during interspecies transmission between animals and humans raise concerns about whether the current vaccines can protect against emerging strains in the future.

The extensive sequencing of viral genomes from animals and humans and worldwide data sharing will be central to efforts to monitor the key mutations that could affect vaccine efficacy. Laboratory-based studies should test whether the observed mutations affect key features of the virus, including pathogenesis, immunogenicity, and cross-neutralization. Moreover, preparedness of vaccines based on newly detected variants should be considered in advance. In the long term, vaccination of animals should also be considered to avoid economic losses in agriculture.

There has been debate about whether bats or pangolins, which carry coronaviruses with genomes that are ∼90 to 96% similar to human SARS-CoV-2, were the animal source of the first human outbreak (4). Evolutionary analyses of viral genomes from bats and pangolins indicate that further adaptions, either in animal hosts or in humans, occurred before the virus caused the COVID-19 pandemic (13). Therefore, an animal species that has a high population density to allow natural selection and a competent ACE2 protein for SARS-CoV-2—mink, for example—would be a possible host of the direct progenitor of SARS-CoV-2.

Another debate concerns the source of SARS-CoV-2 that caused the COVID-19 outbreak at the end of 2019. The current data question the animal origin of SARS-CoV-2 in the seafood market where the early cases were identified in Wuhan, China.

Given the finding of SARS-CoV-2 on the surface of imported food packages, contact with contaminated uncooked food could be an important source of SARS-CoV-2 transmission (8).