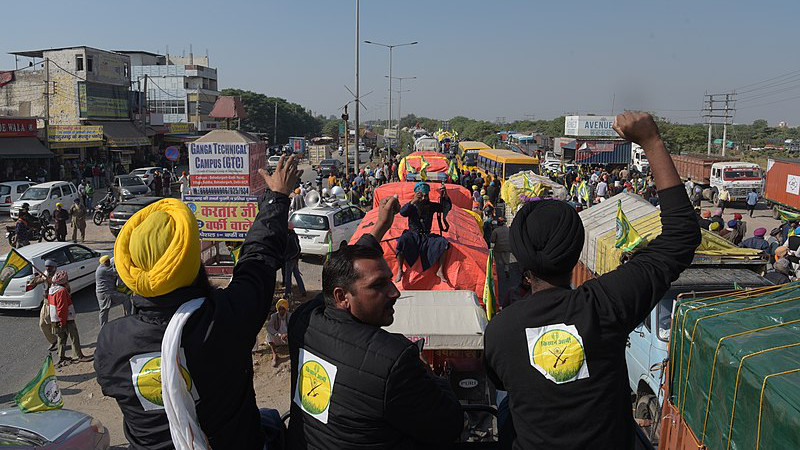 In September 2020, President of India Ram Nath Kovind approved three new agriculture bills, which were earlier passed by the Indian parliament. The Farmer (Empowerment and Protection) Agreement of Price Assurance and Farm Services Act, 2020, The Farmers Produce Trade and Commerce (Promotion, and Facilitation) Act, 2020 and The Essential Commodities (Amendment) Act, 2020. In response to these laws farmers mainly from Punjab started protests as these laws could seriously damage farmers interests and strengthen the private enterprises. The acts are clearly biased and an attempt to exploit the hardworking farmers. The amendments in the new acts is as follow;

The Farmers (Empowerment and Protection) Agreement of Price Assurance and Farm Services Act; this bill has something to do with farmers inters through legal agreement and allows farmers to do contract farming and market their products freely.

The Essential Commodities (Amendment) Act; is an amendment to an existing act. This law now frees items for trade except in case of war, famine, high price rise or any other natural calamities. In the first term Prime Minister Narendra Modi made a promise to double farmers’ income by 2022. The Modi government claimed that “these ordinances would create one nation, one market and freedom of choice to farmers”.

These new ordinances will change the agriculture industry of India where agricultural workers make up half of the labor force, the outcome of these bills could be disastrous. Farmers are afraid regarding these bills, that a mighty corporate investor would dominate the farmers and put liabilities clauses on them. They easily exploit the farmers with legal clauses. Majority of the farmers do not have enough knowledge to understand lengthy contracts made by multinational companies and fight with legal battles.

This will hardly make any difference to small farmers. They are anyhow selling to mandis and due to transportation and logistics costs small farmers do not have any incentives to go long distance or intrastate to sell their goods. 86 percent of farmers in India are not able to go even from one district to another to sell their produce.

Everything in the APMC mandis is regulated, transactions are considered and there is a minimum support price. And no minimum support price was given to farmers outside these mandis. These ordinance corporatization Indian agriculture. Where big companies would be able to establish their monopolies over the agriculture sector of India, it would become easier to exploit farmers. Private companies are smart, they buy at less and sell it in high price to earn profit.

The Bhartiya KisanUnion and other farmers organizations sought permission from the Haryana government for a protest rally. The BJP led Haryana government denied their demand,despite these hundreds of farmers on their tractor protest with slogan, KisanBachao, Mandi Bachao.Regardless of cold weather and state brutality more than 200,000 farmers pledge to continue protest until the laws are scrapped. The reaction of Indian government  has been extremely shocking and raises many questions on the country’s democracy and freedom of speech. Government tried their utmost to stop this march, they set up barricades, use of water cannons, tear gas, and dig up the highway to prevent farmers from crossing it. In Haryana section 144 imposed, bus service suspended, and more than 100 farmer union members were arrested. More than 500 farmers were arrested in Tamil Nadu and Karnataka. On 27 November Delhi Police wanted permission from Delhi government to convert 9 stadiums into temporary jails but the ruling part of Delhi, Aam Aadmi Party denied their demand.

The second term of Modi in power is cultivating a hard phase of Hindutva in the Indian polity. Hindutva ideology of BJP is now coming at the forefront which is reflective of nonaccommodative behavior towards at large. BJP gets the highest ever mandate in 2019 elections and Modi’s government is overconfident to redress the issues. But Modi not only polarized Indian society, also divided it permanently. The reaction against Modi’s policies has increased within Indian society. At the crossroad of socio-political transformation, the old liberal order in India has crossed the horn with the new Hindu nationalist social order. The state machinery and the entire political apparatus have stood by BJP’s aspiration. However, the regional divide, liberal segments in almost all states, and a constitutional contest between states and federation have barred BJP from establishing a political order of its desire.

The revocation of articles 370 and 35A and illegal annexation of Kashmir on August 5, 2019 was the first major aggression of Modi. Indian government placed Occupied Kashmir under inhumane curfew after abrogation of these articles. The Citizens Amendment Act (CAA) is the second incautious step taken by Modi’s government in his second tenure. This act targets Muslims in India and downgrades them to second-class Indian citizens where they will have to prove their citizenship.

The world is in the grip of Covid-19, human and social lives have undergone severe devastation. The entire world is in an endless battle against this novel coronavirus disease. It is surprising to realise that the most recent step of the Modi government passed the anti-farmers bills, which aimed at benefiting multinational corporations. The government has left farmers at the mercy of big corporations.

In Uttar Pradesh farmers were not allowed to gather for protest and government stopped printing of pamphlets and posters in favor of protest.Zee news was running a hashtag #FarmersProtestHijacked and #Andolan Mein Khalistan. Times news running a hash-tag “#KisanKanoonClash” and said that opposition is behind the farmers’ protest and CNN news termed “Dilli Chalo” a war.

These all tactics used by Indian media to distract and defame all the protesters, this will lead to the fall of democracy and freedom of speech in the entire country. Indian democracy has declined over the time. It indicates that freedom of expression, civil liberties, academic freedom index and rule of law in the country declines after 2014. The situation is so dire today that they are comparable to the state that was prevalent under Indira Gandhi during the emergency.

The farmers are demanding that there should be an Inside and outside mandi assured minimum support price.  The number of mandis should increase. Pull back all these ordinances, regulate APMC, Loans of farmers must be cleared. A law should be made for MSP to be at least 50 percent more than the weighted average cost of production. A couple of days back the Indian supreme court gave a verdict to issue a stay order on the Indian government’s decision of ordinances but the track sheet of Indian government shows that they have an influence upon the judiciary and they have used them in the past to evade any sort of trouble they were involved in. The recent verdict of the high court is a similar kind of move to trick the protestant. The future situation is obscure but one thing is sure that Indian government has failed to maintain internal stability as they are busy defaming other countries. The report of the EU disinfo lab proves that Indian government was so busy in funding disinformation that it overlooked its own citizens.

*Abdul Basit, has a Masters in Defense and Strategic Studies from Quaid-I-Azam University Islamabad