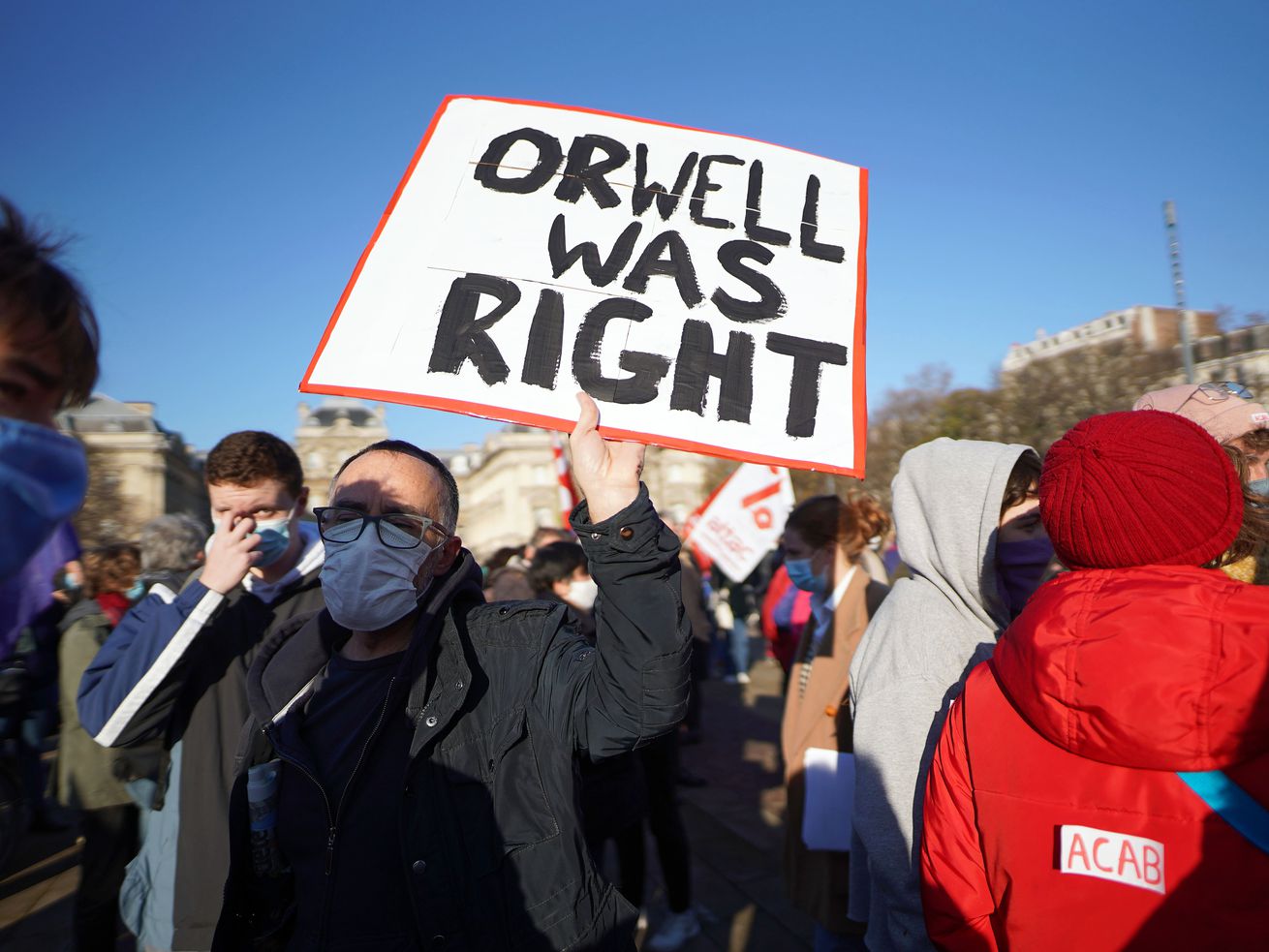 A protester holds a sign reading “Orwell was right” as they demonstrate at Republique Square of Lille in protest of the French government’s proposed global security law bill on November 28, 2020, in Lille, France.  | Sylvain Lefevre/Getty Images

How the right made the word “Orwellian” an empty cliché.

When Trump took office in 2017, sales of George Orwell’s dystopian classic went up by 9,500 percent. And in the wake of January’s Capitol riot, as Senator Josh Hawley decried his book cancellation as “Orwellian” and Donald Trump Jr. responded to his father’s ban from Twitter with the lament that “We are living Orwell’s 1984,” 1984 once again flew up Amazon’s bestseller list, briefly sitting at No. 1.

Last time 1984 returned to the bestseller list, it was because terrified liberals feared the Trump administration would drive us straight into the dystopian horrors of 1984, in which Big Brother is always watching, forcing his subjects to believe that 2 + 2 = 5 if he says it does. This time, it appears to be because outraged conservatives fear that private corporations have begun to censor public speech. But either way, it’s Orwell’s time to shine again.

Orwell despised a lot of words. He wrote a whole essay on them in 1946. Titled “Politics and the English Language,” the essay takes aim at all of Orwell’s pet hatreds: excessive use of Latinate instead of Anglo-Saxon words; unwarranted use of the passive voice; mixed metaphors; clichés; and the phrase “not un-,” as in “it is not unlikely that Trump will seek office in 2024 if not barred from doing so.” (Redundant, fumes Orwell. Just say, “It’s likely.”)

But what Orwell is particularly angry about is imprecise language, and language that conceals rather than clarifies. Which, for him, includes most political language. “Political language,” he writes, “is designed to make lies sound truthful and murder respectable, and to give an appearance of solidity to pure wind.”

We are living Orwell’s 1984. Free-speech no longer exists in America. It died with big tech and what’s left is only there for a chosen few.

This is absolute insanity! https://t.co/s2z8ymFsLX

For this reason, Orwell argues, politicians are particularly given to lazy, sloppy rhetoric, filled with meaningless buzzwords and clichés. Political language, he says, muffles the sense of what is being communicated, which is so often indefensible, with an overlay of righteous justification. And as a result, those who get caught up in this style of speech — both its speakers and its listeners — find their ability to think caught and shaped by their impoverished language. They are no longer able to recognize a lie as a lie and a murder as a murder because the language in which they speak is so vague as to allow them to consider a lie an alternative fact and a murder a tragic yet unavoidable accident.

That’s why in 1984, one of Big Brother’s chief directives is to keep simplifying the English language into Newspeak, in which anything really positive is doubleplusgood and anything really bad is doubleplusungood. All of the nuances and richness of English are stripped away; the bare and skeletal language that remains renders complex thought impossible. And so the citizens of the dystopian society of Oceana are left blankly following after Big Brother, believing in the lies that he tells them because they no longer have the language to recognize the truth. It’s the argument of “Politics and the English Language” taken to its fullest conclusion.

When Josh Hawley and Trump Jr. use the term “Orwellian,” they are indulging in precisely the kind of lazy and dishonest obfuscation Orwell railed against. They are taking the haze of imprecise associations that have accumulated around the word — bad, dystopian, someone somewhere overreaching probably? — and trying to attach them to such urgent issues for human rights as a politician losing his book contract after a scandal and the most powerful man in the world getting kicked off a social media platform. They are, to put it in terms of which Orwell would approve, lying. They are pretending that very reasonable actions from private corporations are the same as the government kidnapping citizens and shoving their faces into cages full of rats to brainwash them. And they are trying to convince their followers to pretend the same thing, until the pretense becomes real and everyone agrees to believe the lie.

My statement on the woke mob at @simonschuster pic.twitter.com/pDxtZvz5J0

“The great enemy of clear language is insincerity,” Orwell writes in “Politics and the English Language.” “When there is a gap between one’s real and one’s declared aims, one turns as it were instinctively to long words and exhausted idioms, like a cuttlefish spurting out ink.”

The real aims of Hawley and Trump Jr. — and any number of other conservative figures flinging around the “Orwellian” label in the wake of the storming of the Capitol — are to salvage their reputations after abetting an assault on democratic institutions. Their declared aims are to save democracy. To hide the size of the gap between the two, they have turned, instinctively, to an idiom that is now exhausted.

My thoughts at the top on how to fight back against Big Tech’s Orwellian overreach.
Also – the Parler CEO, on how Parler got a lifeline late Fri night (after Amazon stuck a knife in Parler) … only to have it, too, shamed into shunning them. Scary stuff, and so damn wrong. https://t.co/lnEqdJnYCv

The word “Orwellian” doesn’t mean anything anymore. Orwell himself told us what to do with it in that case: Stop using it.