WASHINGTON (AP) — The lead prosecutor for US President Donald Trump’s historic second impeachment began building his case for conviction at trial, asserting on Sunday that Trump’s incitement of the mob that stormed the US Capitol was “the most dangerous crime” ever committed by a president against the United States. A Senate trial could begin as soon as this week, just as Democrat Joe Biden is sworn in as the 46th president.

Rep. Jamie Raskin, D-Md., did not say when House Speaker Nancy Pelosi, D-Calif., will send the single article of impeachment against Trump — for “incitement of insurrection” — to the Senate, which will trigger the beginning of the trial. But Raskin said “it should be coming up soon” as Pelosi organizes the formal transfer.

The House voted to impeach Trump last Wednesday, one week after the violent insurrection that interrupted the official count of electoral votes, ransacked the Capitol and left Congress deeply shaken. Before the mob overpowered police and entered the building, Trump told them to “fight like hell” against the certification of Biden’s election win.

“We’re going to be able to tell the story of this attack on America and all of the events that led up to it,” Raskin said. “This president set out to dismantle and overturn the election results from the 2020 presidential election. He was perfectly clear about that.”

Democrats and the incoming administration are facing the challenge of reckoning with the Capitol attack at the same time that Biden takes office and tries to move the country forward. They say the Congress can do both, balancing a trial with confirmations of the new president’s Cabinet and consideration of his legislative priorities. 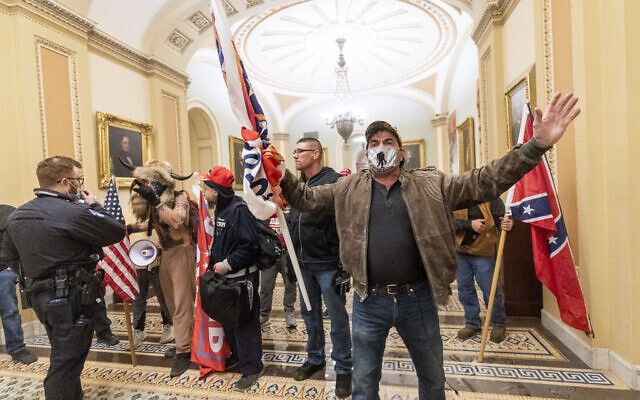 Insurrectionist supporters of President Donald Trump are confronted by US Capitol Police officers outside the Senate Chamber inside the Capitol in Washington, January 6, 2021. (AP Photo/Manuel Balce Ceneta)

Raskin said Congress cannot establish a precedent where “we just want to let bygones be bygones” just because Trump has left office.

Yet it’s clear that Democrats do not want the Senate trial to dominate Biden’s opening days. Pelosi on Friday said that Democrats intend to move quickly on Biden’s $1.9 trillion COVID aid and economic recovery package to speed up vaccinations and send Americans relief, calling it “matter of complete urgency.”

Ron Klain, Biden’s incoming White House chief of staff, said he hopes Senate leaders, on a bipartisan basis, “find a way to move forward on all of their responsibilities. This impeachment trial is one of them, but getting people into the government and getting action on coronavirus is another one of those responsibilities.”

It is unclear how many Senate Republicans — if any — would vote to convict Trump. Republican leader Mitch McConnell of Kentucky is telling his caucus that their decision on whether to convict the outgoing president will be a “vote of conscience.” His stance, first reported by Business Insider, means the GOP leadership team will not work to hold senators in line one way or the other.

McConnell is open to considering impeachment, but said he is undecided on how he would vote. He continues to hold great sway in his party, even though convening the trial this week could be among his last acts as majority leader as Democrats prepare to take control of the Senate with the seating of two new Democratic senators from Georgia.

For Republican senators, the trial will be perhaps a final test of their loyalty to the defeated president and his legions of supporters in their states back home. It will force a further reevaluation of their relationship with Trump, who lost not only the White House but majority control of the Senate, and a broader discussion about the future of the Republican Party as he leaves office. 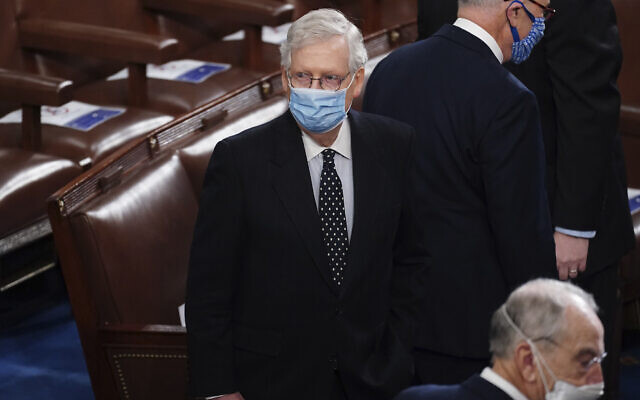 Senate Majority Leader Mitch McConnell arrives as a joint session of the House and Senate convenes to confirm the Electoral College votes cast in November’s election, at the Capitol in Washington, January 6, 2021. (Kevin Dietsch/Pool via AP)

Some GOP senators are already standing by Trump, despite their criticism of his behavior. South Carolina Sen. Lindsey Graham, one of the president’s most loyal allies, said impeachment was a “bad, rushed, emotional move” that puts the presidency at risk and will cause further division.

He said he hopes every Senate Republican rejects impeachment. “Please do not justify and legitimize what the House did,” Graham said.

A handful of Republican senators have suggested they will consider conviction. Two of them, Alaska Sen. Lisa Murkowski and Pennsylvania Sen. Pat Toomey, have said he should resign. Murkowski said the House responded “appropriately” with impeachment and she will consider the trial arguments.

No president has ever been convicted in the Senate, and it would take a two-thirds vote against Trump, a high hurdle. But conviction is not out of the realm of possibility, especially as corporations and wealthy political donors distance themselves from Trump’s brand of politics and the Republicans who stood by his attempts to overturn the election.

Rudy Giuliani, Trump’s personal attorney, was spotted at the White House Saturday and told ABC he was likely going to join Trump’s impeachment defense team. He suggested he would continue to spread baseless claims of election fraud on the Senate floor.

Trump campaign spokesman Hogan Gidley moved to distance Trump from Giuliani’s comments, tweeting: “President Trump has not yet made a determination as to which lawyer or law firm will represent him for the disgraceful attack on our Constitution and democracy, known as the ‘impeachment hoax.’ We will keep you informed.”

There was not widespread fraud in the election, as has been confirmed by a range of election officials and by William Barr, who stepped down as attorney general last month. Nearly all of the legal challenges put forth by Trump and his allies have been dismissed by judges.

Trump is the only president to be twice impeached, and the first to be prosecuted as he leaves the White House, an ever-more-extraordinary end to his tenure. A precedent set by the Senate in the 1800s established that a trial can proceed even after a federal official leaves office. Trump was first impeached by the House in 2019 over his dealings with Ukraine, but the Senate voted last year to acquit.

Ten Republicans joined all Democrats in the 232-197 impeachment vote on Wednesday, the most bipartisan modern presidential impeachment.

When his second trial does begin, House impeachment managers say they will be making the case that Trump’s incendiary rhetoric hours before the attack on the Capitol was not isolated, but directly intended to interrupt the electoral count as part of his escalating campaign to overturn the November election.

A Capitol Police officer died from injuries suffered in the attack, and police shot and killed a woman. Three other people died in what authorities said were medical emergencies.

Raskin and Klain were on CNN’s “State of the Union,” and Graham appeared on Fox News Channel’s “Sunday Morning Futures.”