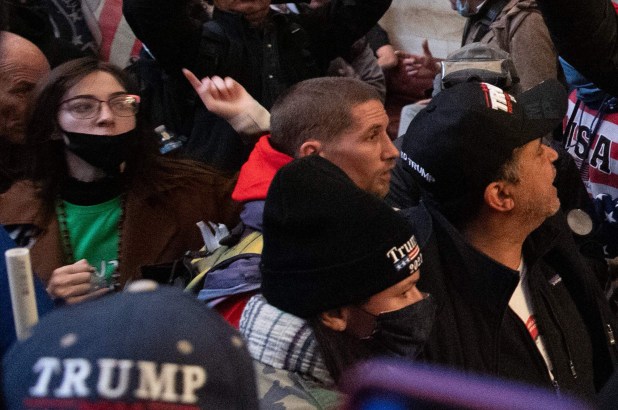 The feds are investigating whether a Pennsylvania woman who was seen on video taking part in the US Capitol riots stole a laptop or hard drive from House Speaker Nancy Pelosi’s office and planned to sell it to the Russians, officials said.

The FBI is seeking Riley June Williams on charges including entering a restricted building, disrupting the orderly conduct of government and engaging in disorderly or disruptive conduct.

There is no indication that a laptop was actually pilfered from the speaker’s office and the agency said in an affidavit that “the matter remains under investigation.”

“It appears that WILLIAMS has fled,” according to the affidavit. “According to local law enforcement officers in Harrisburg, WILLIAMS’ mother stated that WILLIAMS packed a bag and left her home and told her mother she would be gone for a couple of weeks.

“WILLIAMS did not provide her mother any information about her intended destination,” it added.

A witness described as a former romantic partner of Williams claimed to have seen footage of her “taking a laptop computer or hard drive from Speaker Pelosi’s office.”

“[Witness 1] stated that WILLIAMS intended to send the computer device to a friend in Russia, who then planned to sell the device to SVR, Russia’s foreign intelligence service,” an agent said.

A woman identified as Williams — wearing glasses, a green shirt and brown trench coat and carrying a bag over her shoulder — can be seen yelling “Upstairs, upstairs, upstairs,” pushing people toward Pelosi’s office, according to NPR.

The show singles out the woman, saying she was “disciplined, focused, with a sense of urgency, directing people up a staircase.”

On Jan. 16, Williams’ mother told authorities “that a British media crew had come to her home the night before, asking to speak with WILLIAMS, who was not present,” according to the affidavit.

“The news crew presented WILLIAMS’ mother with one or more images taken at the U.S. Capitol on January 6, 2021. Her mother acknowledged that it was WILLIAMS in the image,” the affidavit said.

“It appears that WILLIAMS has fled,” it added.

Williams has not been charged with theft.

Signed in as Michael_Novakhov

Send this story to NewsBlur

Shared stories are on their way…