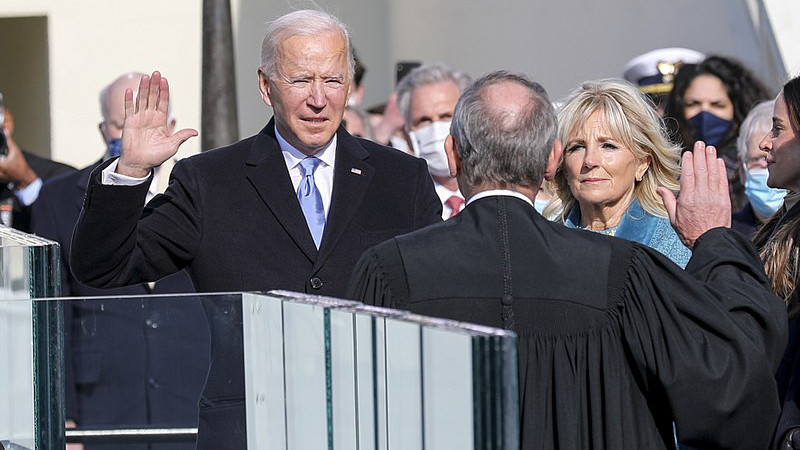 The promise of widespread vaccination is still out of reach for most Americans. A month after the country’s first vaccinations, there’s no federal data showing who is receiving the vaccine.

The coronavirus doesn’t know that the United States has a new president. One full year after COVID-19 arrived in the US — the first case was reported on 21 January 2020 — the pandemic’s winter surge has dragged the US to another awful milestone: More than 400,000 Americans are dead, more than 24 million have been infected and the virus isn’t finished with the US.

The promise of widespread vaccination is still out of reach for most Americans. A month after the country’s first vaccinations, there’s no federal data showing who is receiving the vaccine.

On Day One, the new US president Joe Biden inherits this “mess” as his Chief of Staff Ron Klain calls it. Biden has promised to “manage the hell out of this operation,” setting an ambitious agenda for the first 100 days that includes a national mask mandate, swift vaccinations and direct payments to people hurting from the economic collapse.

Biden is leaning on what he calls his “crisis tested” team. There’s a lot to “manage the hell out of.”

400,292: Total number of US deaths as on 19 January 2021. By the first weekend after Biden takes over, the toll is likely to surge beyond the number of Americans killed in World War II.

4,400: Number of deaths the US recorded on a single day the week before 20 January.

965,000: The number of people seeking unemployment benefits in the final week of the Trump presidency. Before the pandemic, the weekly number hovered around the 225,000 mark, spiked to 7 million in the early days of the pandemic and settled around 700,000 per week since Fall 2020.

6 months: At the current pace of vaccine shipments to New York, it could take six months or more to get shots to 7 million residents already eligible under federal guidelines. New York governor Andrew Cuomo now wants to buy direct from vaccine manufacturers.

18 million: Number of unemployment insurance payments being made every week, according to Treasury Secretary nominee Janet Yellen. She has called for a “sweeping” response, just like the damage.

31 million: Number of vaccine doses distributed as of 15 January. This includes vaccines from Pfizer and Moderna approved for emergency use in the final weeks of December 2020.

80%: Percentage of deaths among those aged 65 and older.

50,000: Number of lives that Biden team “experts” have said will be saved by April if people obeyed the mask mandate.

34%: Infection rates are up by this much in recent weeks, according to Biden.

100,000: Biden aims to have these many people in his public health force, inspired by Franklin Roosevelt’s Civilian Conservation Corps.

100: Biden has promised these many federally supported vaccination centers across the nation within the first month in office.

19.5%: Percentage of US deaths in global toll. The US accounts for nearly 1 of every 5 virus deaths reported worldwide. It has led the global toll for the entire time that the coronavirus has raged within its borders.

$1.9 trillion: The magic number for the virus relief package Biden hopes to push through Congress. This includes direct payments to Americans who qualify based on annual earnings and an increase in the minimum wage to $15 an hour.

14.7 million: Combined total number of vaccines administered in the US including the Pfizer and Moderna vaccines. Pfizer got emergency approval earlier and accounts for a slightly higher number in total vaccinations.

1,384,963: Number of doses administered so far in long term care facilities — which have the highest burden of disease.

200 million: Number of doses that the Trump administration has ordered from Pfizer for its two-shot vaccine. This will be enough for 100 million people and is being purchased at $19.50 per dose.