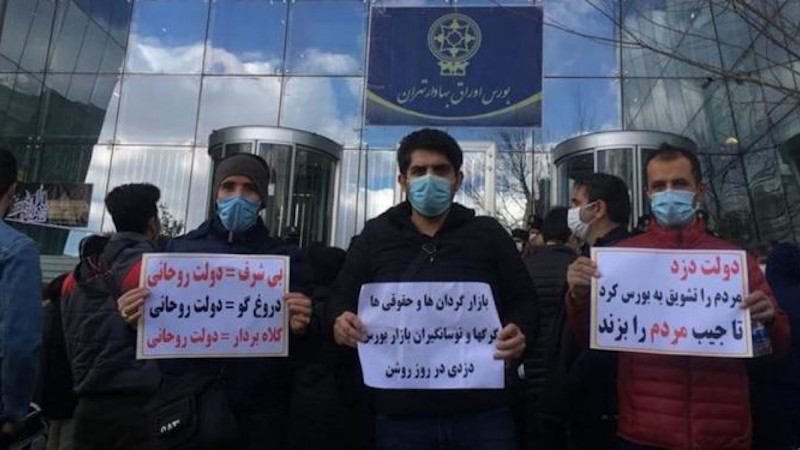 According to a state-run daily the more than two million Iranian stock market investors who lost their savings in the stock market will “riot” if their demands are not met.

The Jahan-e-Sanat daily warned that in order to prevent protests the executive official responsible for the stock market must resign.

Another state-run daily, cited the political interference in Iran’s stock market, and said yesterday only people certain “information” would be able to take advantage of the “political” market.

The daily wrote that a quick glance at the stock market trend from the beginning of the year shows interference which initially led to stocks soaring and then plunging very quickly.

“After certain interactions, institutional investors lined up to buy stocks. It was as if they knew the stocks had an expiration date and wanted run away with their profits. The current protests are a desperate measure. Those who have lost (their savings) and cannot do anything. Their investments are gone”, the report said adding that no court would be willing to issue an indictment for the culprits.

The report indirectly cited the Iranian government and wrote “those who planned for the big profits and compensation for their deficits” are neglecting Iranian stock market investors who are reeling from their losses.

In the past two weeks, Iranian stock market investors held large gatherings outside the Securities and Exchange Organization to demand their lost money. Despite the peaceful nature of the protests, videos on January 19 showed police trying to violently arrest protesters. Other protesters cried out for the police to let them go and prevented the arrests.

Protesters chanted against Rouhani and his administration calling them dishonorable, liars and thieves.

On January 17, Iran’s Deputy Speaker of Parliament said the government had taken advantage of the country’s stock market which has been mostly in the red for the past few days.

“The government has been inadequate, has had misconducts and has taken advantage of the stock market,” Amir Hossein Ghazizadeh said in comments carried by the state-run Mehr News Agency.

In comments carried by the IRGC affiliated Tasnim News Agency on October 20, 2020 Minister of Finance Dejpasand implied that the government used the stock market to compensate for its budget deficit.

“I would like to inform you that fortunately, as a result of the measures devised by the government, in the last six months, we have been able to make up for the shortfall of our resources from the sale of securities and the transfer of shares of state-owned companies.”

In an October 3, 2020 article, the state-run Aftab-Yazd daily also stated that Iran used the stock market to make up for its deficits.